One of the many remarkable features about this planet’s largest quakes (like the one that just happened in Japan) is their truly global effect. Be it the tsunami or seismic waves perceptible and imperceptible, most parts of the planet have been touched significantly by the 8.9.

Let’s start with perceptible seismic waves, i.e., ones people don’t need sensitive instruments to detect. The elastic energy released by this earthquake was enough to set the ground rippling at frequencies and amplitudes people can percieve at distances of greater than 2,500 kilometers (over 1,500 miles).

Shaking intensity as reported online by citizens of east Asia. Data points are colored by intensity and sized by city population. The USGS Did-You-Feel-It page (click image for link) contains the original data and plots of response time and attenuation with distance.

Note the felt reports in Taiwan and Beijing. This affected radius is quite comparable to the huge swaths of the globe that felt both the M8.8 Maule, Chile event last year (most of South America) and the 2004 9.1 Sumatra, Indonesia quake (most of southeast Asia and India):

Felt reports from the other M~9 earthquakes that have occurred since the advent of the USGS's Did You Feel It surveys.

Not only did the perceptible shaking stretch far around the globe in all of these cases, but sizeable elastic waves detected only by sensitive seismometers rippled through the solid crust (and bounced around deep in the mantle), observably circling the globe several times.

Seismic events larger than M~6.5 tend to be recorded globally on broadband seismometers–those that can detect a broad range of frequencies, from sharp local jolts to the long, slow undulations of large, distant quakes. I’ll have another post on seismic waves and attenuation later, for now suffice it to demonstrate the following: Below is a seismic record from northern California showing waves from the 7.2 “foreshock” in Japan on March 9.

Northern California seismic recording of a 7.2 in Japan on March 8 (9th in Japan). Read this like a book; each line represents 15 minutes of recording, so where the oscillations last >15 minutes the records overlap, making it a bit messy. Basically, the ground oscillated detectably in California from the distant quake. The amplitude of ground motion is small, and the frequency of the largest waves is 1 per ~30 seconds, meaning it takes the ground 30 seconds to oscillate one way then back the other, slower than your bedroom fan... no wonder we can't sense it without seismometers.

Compare that to the Mar 11 M8.9 in virtually the same location recorded on the same instrument:

Magnitude 8.9 earthquake in Japan recorded in northern California. The amplitude of ground motion is literally off the charts, but since the frequency is relatively low, we couldn't feel the waves passing though they certainly were.

At the top of the record section is the messy, high-amplitude disruption from the initial passage of the 8.9’s surface waves. Just before 12:00 UTC you can see the dense green squiggle that represents the arrival of seismic waves from a 7.1 aftershock in Japan, with the early high-frequency waves superimposed on the low frequency oscillations continuing from the 8.9.

Several large Japanese aftershocks are apparent throughout the next few hours (in the low- to mid- M6 range, represented by occasional dense, high-frequency squiggles). The record in the background continues to undulate irregularly as elastic waves reverberate through the Earth, bouncing off of the dense metal core, refracting and reflecting off of every boundary or irregularity they come to. Imagine someone jumping into an undisturbed swimming pool–or try it yourself!–and watch as the initial coherent rings of waves bounce off the walls and turn the pool surface into a sloshy, ripply mess. That’s what has happened to the planet.

At around 02:00 UTC another extended period of oscillation begins. This likely represents the (much-diminished) seismic waves from the original earthquake re-circling the globe. Hopefully someone with more seismology expertise than myself will soon put together a nifty stacked plot like this one from 2004 illustrating this repetition.

Of course, the tsunami still has the Pacific ocean sloshing about, roiling in turbulent currents where it reaches the shallow topography of coastlines.

You can see just how turbulent and dangerous this ocean-wide surge of water can be in this video from the coast of northern California, taken as the tsunami arrived. Pay attention to the speed with which the water rises and falls.

Many thanks to Aron Meltzner for doing some superb video sleuthing and pointing me to many of the tsunami clips. I may post a compilation of more footage from all around the Pacific in the near future.

One response to “Japan quake felt over >2500km radius” 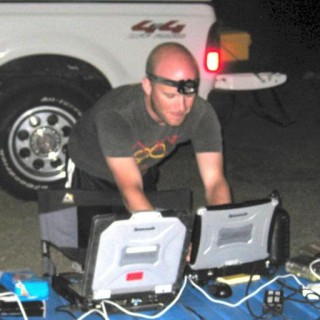